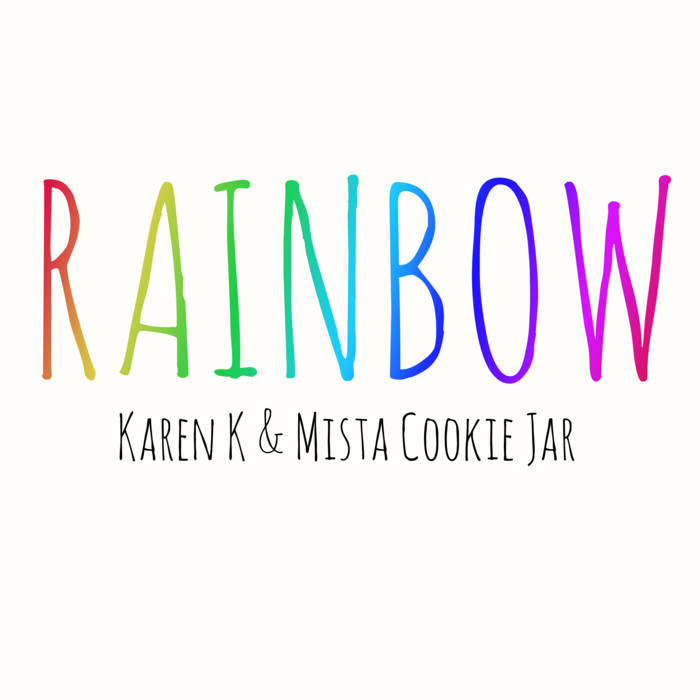 All download proceeds for “Rainbow” will benefit the fight for equality and LGBTQ rights.

"Rainbow," by Karen K and Mista Cookie Jar, is an American pro-LGBTQ pop-anthem for children, families and communities interested in creating an open dialogue about the growing pains of civil progress. “Rainbow” merges a socially critical hip-hop sensibility with the core value of the ever-growing "kindie" music genre (the blend of kids and indie music): respecting the intellectual capabilities of children.

In his article “Can Kids Music Change the World?” Jeff Bogle of Cooper & Kid (www.cooperandkid.com) writes, “A new song is set to be released that will up the ante on the political, world-changing capabilities of kindie music, essentially retesting the waters to see if kid’s music can indeed change the world in the 21st century. “Rainbow,” a for-charity kindie anthem that will immediately draw comparisons to Macklemore and Ryan Lewis’ “Same Love” in that, with a slick thought-provoking rap accompanied by a sweet female hook, (is a) song that reflects the position of those on the just, loving, compassionate, accepting, and tolerant side of history; a side that chooses to see boys and girls not as color-coded robots fated to follow a predictable path and also a side believing that the union of ANY two consenting people willing to commit to each other for an entire lifetime is a powerful and beautiful expression worth celebrating. Legally.”

In “Rainbow,” Karen & Cookie explore themes such as racial and cultural inclusivity, showing one's true colors despite societal gender expectations, and the placement of current social change and civil rights issues into a historical context. Karen K from Boston, MA and Cookie from Los Angeles, CA, collaborated from across the country to create "Rainbow."

“Marriage equality and LGBT rights – this is the civil rights issue of our generation, of our kids’ generation,” says Karen. “We wanted to talk about it in a real way with families and kids to encourage open, honest dialogue at home, in schools, on playgrounds and out in the world.”

Says Cookie, “We hope our song inspires children to begin to think critically about social justice, and that it’s a catalyst for discussion for parents and teachers too. Most of all, we hope it brings a sense of belonging for all, especially those who feel oppressed or bullied.”

Karen K (aka Karen Kalafatas) is a writer and children's music performer along with her band Karen K & the Jitterbugs. A winner of a Parents Choice Award and "Best Kid Vid of 2014" by Zooglobble, Karen and her Jitterbugs - Bumble, Hop, Stinky, Lightning and Love Bug - tour up and down the east coast performing her original genre-swirling songs, and delivering a theatrical, joyful show to kids ages zero to one-hundred-and-three. www.karenkjitterbugs.com

Mista Cookie Jar (aka C.J. Pizarro) is a children's music performer/multi-instrumentalist/music & video producer extraordinaire. With his family band, Mista Cookie Jar & the Chocolate Chips, they've toured all over the US promoting their blend of Urban-Island-Folky-Rock & Roll for the Inner Child. Fusing audio style and visual lyricism, tradition and innovation, Mista Cookie Jar unites a rockstar excitement with the warmth of family music. mistacookiejar.com

Bandcamp Daily  your guide to the world of Bandcamp